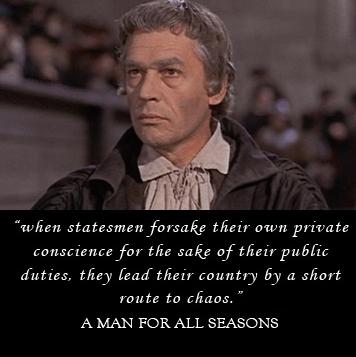 It is no accident that Saint Thomas More is one of our exemplars for Religious Freedom Week.

As a self-professed student of the man and his writings (both my offices are heavily decorated with his images), I find it comforting that the Church sees fit to place him very much “in everyone’s face” at this time. He is the perfect symbol of our non-negotiable support of the right to religious freedom . . . a precious gift that is to be both upheld and defended no matter the price.

Much has been written about More in the nearly 500 years since his martyrdom and there is good reason for there to be such a plethora of thought about him. Perhaps more than any other saint, he has the most prodigious volume of first-hand records available to us about his life, his times and his struggle. He stands above nearly all others in a very real way, for we know the sheer human reality of his belief in religious freedom . . . and of how he was willing to fight for it even at the cost of his life.

In certain human ways, More was very much a man afraid – “I am faint to think of the worst they might do to me”, he told his wife Alice when he was in the Tower – but at the same time, he was also very much a man who was ultimately fearless. The Holy Spirit was indeed upon him in such a way as we can only wish.

Speaking truth to power in such a bold and clear manner . . . so that all who hear are moved to action . . . that is something that we who hold onto his legacy must assuredly strive to imitate.

We must remember that More clearly saw that the blind and absolutist worship of the powers of the State which Henry VIII sought to bring into being is very much still with us today. Movements and policies which attack or erode our religious freedoms today via propaganda, euphemisms and social conditioning are very much all around us.

We are very much in need of bold and fully human role models like Thomas More to remind us of the inherent dignity and sanctity found within all humanity . . . and of the very real threats that still attempt to both deny and deprive us of those giftings even today.