“Blessed are you when people insult you, persecute you and falsely say all kinds of evil against you because of me.” MT 5:11 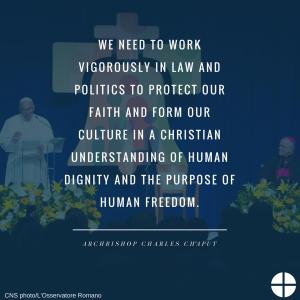 On June 4th, the Supreme Court decided the much-anticipated Religious Freedom case of Masterpiece Cakeshop v. Colorado Civil Rights Commission in favor of Jack Phillips, a Christian baker who declined in 2012 to create a custom wedding cake for a same-sex wedding ceremony. For six years Jack Philips suffered for his Christian beliefs, including death threats, defamation of his character, and the loss of half of his business.

In an interview Philips recounted that the worst thing about his notoriety were the hateful remarks that his wife and daughter received.

“In all of this, the threats against me or disparaging comments, the worst part is that I have to answer the phone so they’re not threatening my wife or my daughter when they pick it up,” Phillips said. “They don’t wait to see who’s on the phone. You pick up the phone, they’re already talking.”

Phillips, a devout Christian, said repeatedly throughout the case that he would have no issue serving gay customers in a context outside of a custom cake for a same-sex wedding. In adherence to his religious beliefs, he also refuses to make Halloween cakes, products with alcohol, and cakes for bachelor parties.

Phillips remained adamant that he never refused service to the couple; rather, he invited them to select anything in his store. But Phillips says he had to say no to becoming personally involved in the couple’s wedding because he opposes same-sex marriage and the Bible proscribes homosexual relations.

Ironically, it was the Colorado Civil Rights commissions that exhibited a discriminatory and bigoted view against Christianity. Justice Anthony Kennedy said some commissioners “disparaged Phillips’ faith as despicable and characterized it as merely rhetorical, and compared his invocation of his sincerely held religious beliefs to defenses of slavery and the Holocaust.”

The epitome of enduring unjust maltreatment was the charge by the Colorado Civil Rights Commission. Justice Anthony Kennedy said some commissioners “disparaged Phillips’ faith as despicable and compared his religious beliefs to defenses of slavery and the Holocaust.”

It was perhaps the ultimate irony in the assault on Phillips’ battle for religious liberty. His father was not only wounded fighting the Nazis during the Second World War, he participated in the actual liberation of a concentration camp.

Phillips said he was deeply wounded when his Christian opposition to same-sex marriage was somehow construed by the Colorado Civil Rights Commission as being morally equivalent to a Holocaust criminal.

“For her to compare standing for my faith and not making a cake to Hitler’s atrocities just is unspeakable,” Phillips said.

Today’s decision confirms that people of faith should not suffer discrimination on account of their deeply held religious beliefs, but instead should be respected by government officials. This extends to creative professionals, such as Jack Phillips, who seek to serve the Lord in every aspect of their daily lives. In a pluralistic society like ours, true tolerance allows people with different viewpoints to be free to live out their beliefs, even if those beliefs are unpopular with the government.”

Coincidentally, or providentially, Archbishop Kurtz, the chairman of the USCCB’s Committee for Religious Liberty recently announced the observance of Religious Freedom Week from June 22-29, 2018. Serving Others in God’s Love: Religious Freedom Week 2018, which begins on June 22, the Feast of Sts. Thomas More and John Fisher, and ends on June 29, the Solemnity of Sts. Peter and Paul.

“Religious freedom allows the space for people of faith to serve others in God’s love in ministries like education, adoption and foster care, health care, and migration and refugee services. We encourage people of faith to reflect on the importance of religious freedom so that we might have the space to carry out our mission of service and mercy, and we invite everyone to pray for our brothers and sisters who face intense persecution in other parts of the world.”

Many threats to Religious Freedom stand before us including:

As Blessed Pope Paul VI states in Declaration on Religious Freedom (Dignitatis Humanae) “Religious freedom means that all men are to be immune from coercion on the part of individuals or of social groups and of any human power… no one is to be forced to act in a manner contrary to his own beliefs, whether privately or publicly, whether alone or in association with others…”

On Friday, June 22, 5:00 p.m., the Pro-Life office of the Archdiocese of Louisville will sponsor an opening Religious Freedom Week Mass at the Little Sisters of the Poor (15 Audubon Plaza Drive, Louisville, KY 40217).

The memorial Mass for SS. Thomas More and John Fisher on June 22 (their feast day) will recognize how they bore witness to the truth (and paid for it with their lives). Fr. Pat Dolan, (Brigadier General) Army National Guard Assistant to the Chief of Chaplains and Moral Theologian will celebrate this special Mass.

I hope you will encourage folks to attend.