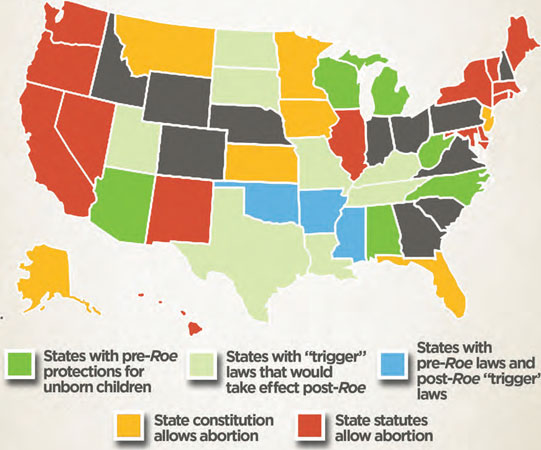 Recently, at the KY Right to Life Celebration of Life Banquet, keynote speaker Seth Gruber observed that every age has a crisis against the dignity of life that galvanizes the nation. For example, in the 1800’s in America the pro-life crisis was slavery, and in the 1940’s in the Crisis was the holocaust and WWII. As Gruber passionately stated, because of the incomprehensible loss of human life involved, the preeminent human rights crisis of our time in undoubtedly abortion. The Bishops of the Church have been affirming this for years and now, finally, with the upcoming supreme court decision of Dobbs v. Jackson it looks like the rest of the nation is beginning to agree.

States across the nation have been rushing to either affirm the dignity of life for the unborn, or to double down on abortion rights. California, Maryland, Colorado, and Vermont among others have passed legislation codifying abortion as a constitutional right and even extending taxpaying funding for transportation, child care, housing and paid leave for women seeking abortion from other states. In anticipation of the Dobbs decision, the current administration even attempted to forward the Women’s Health Protection Act, the most aggressive abortion rights legislation in our country’s history. Thank God it failed in Congress.

However, other states have made national headlines for passing legislation which recognizes the dignity of human life. Last week Kentucky representatives overrode the Governor’s veto of HB 3, a pro-life omnibus package which, among other things, outlaws abortion after 15 weeks, requires parental permission for minors who are seeking abortion, and closes loopholes in securing mail order abortion drugs without appropriate doctor consultation. Last week Florida signed into law a similar 15 week abortion ban. They follow a string of pro-life victories in Texas and many other states which either currently restrict abortion or have post-Roe “trigger laws” that will go into effect if Roe is overturned.

With the country so divided it is more important than ever that we, as a pro-life community become unified in putting our time, talent and treasure into supporting the pregnancy resource centers, maternity homes, and other counseling ministries of our archdiocese to ease the burden of women with unplanned pregnancies. If this is the crisis of our times everyone must get involved. Ask yourself: “What am I doing to build up the Culture of Life in my home and my community?”