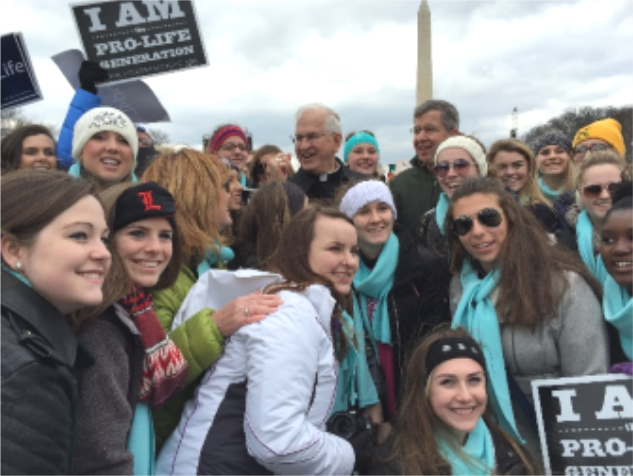 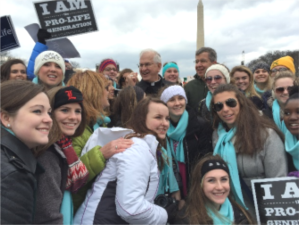 “You may not see the impact of your love, but God sees it. The love in your hearts is totally unique to you . . . and your love saves lives” Sr. Bethany Madonna‘s stirring heartfelt speech to a crowd of over 500,00 epitomized the theme of “Love Save Lives” at the March for Life Rally in Washington D.C. on January 19th. Sr. Bethany, with the Sisters of Life, a religious community dedicated to the protection and enhancement of the sacredness of every  human life, was one of several speakers at the March for Life.

Approximately 500 parishioners from the Archdiocese attended the March, with the clear majority being young people who are increasingly Pro-Life. Most of the Archdiocese’s local high schools were well represented including students from Assumption, Sacred Heart, Mercy, Trinity, DeSales, Immaculata, Holy Angels, Bethlehem, homeschools and area public schools as well. Also, several Youth groups attended including some junior high school students.

The itinerary for the March for Life was a 3-day full-immersion in the dignity of human life including the St. John Paul II Shrine, on Thursday, January 18th that included a talk by Archbishop Kurtz in the Shrine auditorium to 200 students and adults focusing on the need to remain vigilant with all Life issues.

That evening, most of the Louisville pilgrims attended the annual Pro-Life Vigil Mass at the Basilica of the National Shrine of the Immaculate Conception. “We are here to advocate and give witness, to advocate for those who cannot yet speak or walk with us, the preborn baby, whose future is in jeopardy and can be ended by a so-called choice by another; to give witness that millions, mostly young people, share a passion that the little baby has civil rights,” Cardinal Dolan proclaimed to the packed Church of nearly 20,000 of mostly high school and young adults, sitting almost anywhere, just to be part of a Life-affirming event.

The following morning, January 19th, most of the students sacrificed sleep and got up at 5:00 a.m. to eat and get on a bus to attend a Youth Mass and Rally at the Capital One Arena. Father Martino Choi, the parochial vicar of St. Patrick Parish in Rockville, Maryland, homilist at the Mass touched the hearts of the crowd with his moving story of a mother’s decision to choose “life” in spite of her doctor’s recommendation of abortion, warning her that her child would be born with birth defects and only have a year to live. Fr. Choi, explained, “It was not that the parents were capable of ‘superhuman love’ that made this possible, but what they had was faith. They recognized this life is a gift from God. They recognized that every human life is loved by God.” To the surprise of the crowd, Fr. Choi revealed, “This woman is my mother and I am that child.”

At the conclusion of the Youth Mass and Rally, the students and chaperones walked to the March for Life speaker stage located near the Washington Monument. Besides Sr. Bethany, other speakers addressing the March included Speaker of the House Paul Ryan, Pam Tebow, the mother of former pro-football player Tim Tebow, Matt Birk, former NFL player, several members of Congress and Vice-President Mike Pence. Also, a first in the history of the March was made when President Trump became the first sitting U.S. president to directly address the March for Life. President Trump echoed the Love Saves Lives theme by telling the crowd, “You love every child – born and unborn – because you believe that every life is sacred, that every child is a precious gift from God.”

The pilgrimage concluded with a visit to the Capitol and the opportunity to hear from Representative Brett Guthrie and Senate Majority Leader, Mitch McConnell. Despite the fatigue of two overnighters on the bus, and the non-stop itinerary, the students came away with some fascinating comments.

Christopher Kolibab Jr., a Trinity student reflected on the March. “Being pro-life is being a voice for the voiceless, being able to stand up for those who are being stripped of their dignity. We are fighting for the commonplace idea that all are equal. Though many believe this in theory, action must be put into place, and that action starts with us. I feel returning from this trip is that we must all take this action. It doesn’t have to be starting a club or whatnot, but simply starting with an overall changed mindset. If we love, we will be loved.”

Janell Prater Jr. student at Oldham County, summed up her experience this way, “The trip for me was the emphasis on the dignity of life in all stages and all forms. Hopefully I can use this to help others understand what the pro-life movement is actually about. You always see on twitter and the media that pro-life people only care about people until birth, and then we abandon them to fend for themselves. The messy politics involved with the movement can often make it seem like that, but I want to share with people and let them know of a passion for life that does not have limits – no age restrictions, race, color, language, nationality, education or income. Amazing experience!!”

Maggie Miller, an Ambassadors for Life member and senior at Immaculata Classical Academy, who has attended the March several times came away with a distinct perspective from past years. “I’ve been to the March for Life for many years, but this year was different. I feel like because of the trip I’ve grown even more into the strength that my faith is determined to give me. As we spent two days traveling, marching, and most of all praying, I felt a fire begin to grow within my soul.

I feel like I was empowered by Sister Bethany Madonna, she seemed so on fire about the issue [of abortion], wanting everyone to know exactly how she felt and how she sees it. She brought back my own fire on the subject of abortion, my strength against it, and my want for no women to have to buy into the lie that this is a way to fix what they deem as a problem.”

Michael Dolson, a member of Ambassadors for Life, attending his second March for Life. “It was absolutely amazing to be part of a crowd so large it was impossible to see it all at once, all united for one cause. This trip was finished perfectly with our attending the Students for Life of America Conference, where we were educated more fully on the abortion issue.”

Becca Ulrich, Ambassador for Life and senior at Bethlehem H.S, attending her third March for Life. “My trip to Washington D.C. for the March for Life was amazing. Besides the March, itself, my favorite part of traveling in D.C. is the Vigil Mass at the Basilica of the National Shrine of the Immaculate Conception. Being in the Basilica with thousands of fellow Catholics is so awe inspiring, and you can definitely feel the presence of the Holy Spirit.

Every time I attend this pilgrimage I am blessed with a feeling of comfort and compassion. Just knowing the reason we are there to march, brings complete joy to my soul. I will always continue to protect life from the moment of conception to natural death. This pilgrimage is also an awesome time to connect with fellow classmates and friends who share the same belief as me. I cannot wait for next year to march for life in Washington D.C.!”