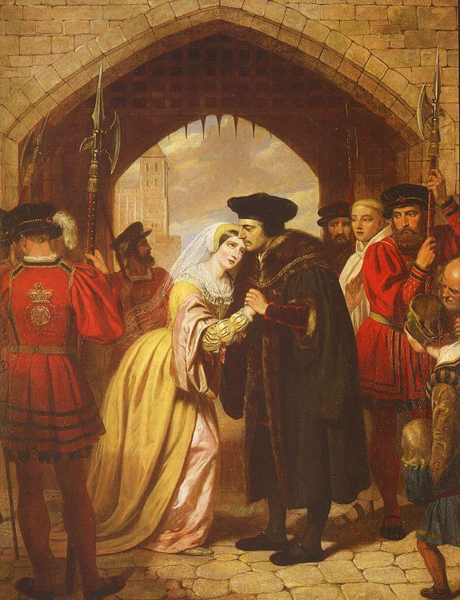 “Although I know well, Margaret, that because of my past wickedness I deserve to be abandoned by God, I cannot but trust in his merciful goodness. His grace has strengthened me until now and made me content to lose goods, land, and life as well, rather than to swear against my conscience. God’s grace has given the king a gracious frame of mind toward me, so that as yet he has taken from me nothing but my liberty. In doing this His Majesty has done me such great good with respect to spiritual profit that I trust that among all the great benefits he has heaped so abundantly upon me I count my imprisonment the very greatest. I cannot, therefore, mistrust the grace of God.”

St. Thomas More wrote this to his daughter Margaret from his cell in the Tower of London.  He was unjustly imprisoned by King Henry VIII.  Soon after writing this letter, Thomas More was beheaded for refusing to acknowledge Henry as Supreme Head of the Church of England and the annulment of his marriage to Catherine of Aragon.

In an era where manly virtue and heroism is sorely lacking, it is refreshing to recall the noble and courageous sentiments of St. Thomas More to his beloved daughter, Margaret.  Even in the face of harsh treatment, imprisonment and ultimately the undeserved sentence of death, St. Thomas More never wavered in his stance for tenets of his Catholic faith.

Exemplifying what fatherhood is all about; St. Thomas was more concerned about the welfare of his daughter and family than his impending sentence of death.

“Farewell, my dear child, and pray for me, and I shall for you, and for all your friends, that we may merrily meet in heaven.”

Thomas More had 4 children and was regarded as a affectionate father.  Thomas More was a devoted family man.  He was a writer and an intellectual of his time and he wanted to make sure his children were well educated, especially in the Catholic faith.  He regularly wrote letters to his children whenever he was away on legal or government business, and always encouraged his children to write to him as well.

More was known to have a jovial and dry sense of humor.  Like many of the great saints at their time of death, extraordinary grace engulfed St. Thomas More.  His fears were gone, he was ready to meet his Savior and he even had the last laugh as he merrily faced his executioner.  “He laid his head down on the chopping block but pulled his beard aside, telling the hangman, ‘I pray you let me lay my beard over the block lest ye should cut it.’”  As legend, he purportedly quipped, “This hath not offended the king.”

St. Thomas More is a man for our times, as well, not only a role model for fathers but as a martyr and defender of religious freedom.  Sir Thomas More died on July 7, 1535.  He is memorialized on June 22 along with St. John Fisher, bishop, cardinal and martyr, who also died during the English Reformation for refusing to acknowledge Henry as Head of the Church of England.

The United States Conference of Catholic Bishops is holding its annual Fortnight for Freedom, a special time for prayer, education, and action.  The Fortnight includes the 14 days from June 21 – the vigil of the Feasts of St. John Fisher and St. Thomas More, great martyrs who remained faithful in the face of religious persecution – to July 4, Independence Day.  The theme for 2017 is “Freedom for Mission.”  We encourage you to hold firm, to stand fast, and to insist upon what belongs to you by right as Catholics and Americans.  Our country deserves the best we have to offer, including our resistance to violations of our first freedom.  https://www.archlou.org/fortnight/

A special Fortnight for Freedom Mass will be held in Louisville on Friday, June 23, 5:00 p.m. at the Little Sisters of the Poor (15 Audubon Plaza Drive, Louisville, KY 40217).

O God Our Creator,  From your provident hand we have received our right to life, liberty, and the pursuit of happiness.  You have called us as your people and given us the right and the duty to worship you, the only true God, and your Son, Jesus Christ.

Through the power and working of your Holy Spirit, you call us to live out our faith in the midst of the world, bringing the light and the saving truth of the Gospel to every corner of society.

We ask you to bless us in our vigilance for the gift of religious liberty.  Give us the strength of mind and heart to readily defend our freedom when they are threatened; give us courage in making our voices heard on behalf of the rights of your Church and the freedom of conscience of all people of faith.

Grant we pray, O heavenly Father, a clear and united voice to all your sons and daughters gathered in your Church in this decisive hour in the history of our nation, so that, with every trial withstood and every danger overcome – for the sake of our children, our grandchildren, and all who come after us – this great land will always be “one nation, under God, indivisible, with liberty and justice for all.”

We ask this through Christ our Lord.  Amen