by Deacon Derrick and Mistiana Barnes

Mistianna: There are a million upsides to the technology that’s now a core part of our daily lives. Unfortunately, one of the huge downsides seems to be the effect it has on marriages. So, when I read about the increase in cell phone usage in 2019, I was intrigued. According to the on-line researcher, Emarketer, the average adult spends two hours and 55 minutes per day on their cell phones.

Deacon Derrick: The amount of time married couples spend on their mobile devices overshadows the amount of time they spend in face to face communication. Sadly, the average married couple spends only seven minutes a day communicating with one another. Today, being plugged into our devices means we aren’t truly being present to the ones we love. So, it is no surprise that the divorce rate is hovering around 40%.

Mistianna: When I am focused on my iPhone when Derrick and I are trying to have a conversation, whether it’s by being on Facebook, Instagram or while scrolling through e-mails, my full attention isn’t on what Derrick is saying to me, but rather on having a virtual relationship with my cell phone. We’ve all been there…so lost in our virtual worlds that we zone out, loose complete track of time and ignore everyone and everything around us, including our spouses.

Deacon Derrick: Your partner being constantly plugged into a device can cause all kinds of relationship issues, as you start to feel like they value their virtual life more than they do you. You often feel snubbed if they reach for their iPhone when you’re spending time together and that means feelings of resentment begin to bubble under the surface. You will know this problem exists when your iPhone recognizes your face faster than your spouse. Therefore, it is paramount that you make your marriage a priority and have hard and fast rules on when it is acceptable and when it is not acceptable for the use of electronics. Mistianna and I do not allow cell phones at the dinner table. They are also turned off when we sit down each evening for 30 minutes of quality conversation.

Mistianna: Don’t let your cell phone destroy your marriage. If you flick through Twitter or Instagram while having a conversation with your spouse, STOP! Remember, you took your spouse until death do you part. So, you’re stuck together forever! However, you’ll get rid of that cell phone at your next contract renewal.
D 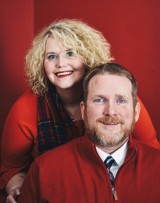 eacon Derrick Barnes and his wife Mistianna were married in 1995 and were college sweethearts. They have one daughter, Kailee, who is in college at UK, and two fur babies Elvis and Presley Anne. They have been involved in a variety of Marriage Prep Programs in the Archdiocese of Louisville for more than 18 years, as a sponsor couple, speakers at Foundations of Marriage and presenters for the Engaged Encounter.

In, 2012, Derrick was ordained a deacon and is assigned to Saint Margaret Mary Parish in Louisville, KY where he and Mistianna are parishioners and founders of SMM’s Marriage Ministry. Deacon Derrick and Mistianna are passionate about the Sacrament of Marriage and feel called to help others have happy and holy marriages.